How amazing is it that the God who created the universe was willing to take on the form of a mortal man, suffer the indignities of being human, and even let Himself be ridiculed and hung like a common criminal–all so we might be forgiven and brought back into relationship with Him?

Think about everything you hate having to do. God took out the trash, washed the dishes, fed the donkeys, and even bathed other people’s feet. He who could call upon a legion of angels to verify His power allowed Himself to be mocked by much lesser beings. He allowed himself to be whipped, spit upon, crucified.

He who could raise the dead allowed Himself to experience the horror of a last, desperate breath. He watched His own earthly mother mourn for Him. He knew the motley crew He called disciples would trudge home after His death in an unknowing sense of defeat.

We humans like to humanize God. Yet, even though we are made in His image, we cannot even begin to fathom how far down the scale of existence our Lord traveled to become our Savior. Fortunately, we don’t have to understand it.

We just have to believe.

Christmas is about the most amazing birth that will ever happen in our world, when He who has the power to move mountains, took on the shell of a being incapable of lifting a pebble.

But if we fail to recognize His glory, even the rocks will cry out.

My Bible reading in the last week has brought me back through the Exodus and into Leviticus.  These books are filled with the story of an omnipotent God establishing His singular status among a people He had claimed as His own generations before, but who were stubbornly clinging to the idols of this world.

Even after He parted the Red Sea for them and then closed it over their enemies, the Egyptians, even after He led them through the desert, feeding them and giving them water when they cried out for it, the Jews continued to mess up.  While Moses stayed 40 days on the mountain speaking with the one and only God, his compatriots created a golden calf to worship!

We humans are a stupid lot, unworthy of the grace and patience and mercy that God continues to show us.  But, unless you have brazenly broken a commandment of late, when was the last time you really took a long moment to feel the depth, and height, and breadth of your need for God’s forgiveness?

Reading the graphic descriptions instructing the Jews on how to perform their sacrifices that Exodus portrays, I realized a benefit to reading the Old Testament that I had not exactly thought about before.  If you put yourself in the shoes of a “pre-Christ” Jew, you begin to understand with even further depth just what His sacrifice on the Cross signified.

I’m a city girl, despite the very country roots of my ancestry.  Truth be told, if I had to kill my own meat, I would be a vegetarian (which makes me a hopeless hypocrite, but that is beside the point).  The Jews were nomads who relied on their ability to farm and herd to survive.  Slaughtering an animal was a regular thing.

But, how regular would it be to take the very best of your flock, carefully kill it, dismember it, and watch it burn, realizing that you had just watched a month’s worth of eating rise in smoke rings to the sky because of your own sin?  Here was a real choice between the Spirit and the flesh.  The only way to right the individual’s relationship with God was to follow His instructions for sacrifice, to watch the very bread from your table, and the very best bread at that, go behind the curtain into the Holy of Holies, where only a select few could ever go.  Then, and only then, would you be right with God again–until the next time you sinned.

Believing in your need to sacrifice was believing in your own failings, and that meant, in part, knowing the awesome wrath of the God who made you.  Throughout the Old Testament, the people of God remember and forget, in a sort of bell curve of cycles that truly depicts the stubborn and stupid nature of the human race. At one point, they even lose the Word of God altogether, gathering to have it read to them in rejoicing wonder when it is discovered again.

It is easy to look back and criticize.  How can you be so stupid, you rail at the Jews as they wander in the desert for 40 years, victims of their own folly.  Did you not see God in the fire and the cloud?  Did you not experience the plagues that rescued you from Egypt?  Do you not remember Sodom and Gomorrah?

The answer is, of course, that we are all of us stupid on a regular basis.  And with Christ’s message of love, it is easy to put aside the potential of God’s wrath.

But, God’s wrath does play a very important role in our relationship with Him.  How Christ took that cup of wrath upon Himself for us is a thought for another day.  Though, have no doubt, His taking on of that cup of wrath is the most important thing of all.

You wouldn’t know it just looking at this photo, but this young tree in my backyard represents a sort of miracle.

When we had one of the bad hurricanes blow through a few years back, a full-grown version of this tree covered my back patio, bearing a fruit that I couldn’t identify, but that the guys who did my yard liked to pick and eat, so I know it was edible.

The mighty winds of the storm up-rooted my beautiful tree, so I had the guys cut it down, letting them leave the trunk in place to save everybody a lot of hassle.

Imagine my surprise when I looked out my window one day to see what looked like a tiny weed coming up by that trunk. Before long, the weed started looking more and more like my old tree. Some day, I believe the yard guys will have fruit to snack on again. 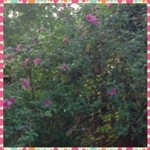 I am no credit to my ancestors. I have actually killed bamboo! So, when I looked out this cold winter at the bare branches of another tree in my backyard, I figured the cold had finally killed it.

But, Spring has come and with it, the leaves and beautiful flowers I love to see as I do dishes. It happened without my even noticing, this renewal. One day, the branches were bare. This morning, I was blessed to notice the tree had bloomed again.

Our relationship with the Maker of all things is like that. Every day, whether we realize it or not, He is ready to let us begin anew. He is working His Spirit in us to make us bloom.

The love of Christ is new for us every day. No matter how badly we mess up, He is ready to forgive. We can begin clean again.

And produce the fruit that feeds forever.

For the final day of National Poetry Writing Month

Being neither Whitman nor Frost,
we have come anyway,
to this place of words,
to this gathering of minds
brought to us by a digital world
that even cummings’ imagination
did not lay onto an altered page.

Equalized by these aughts and ones
that string together like DNA,
this man-made code that awes us,
leads us, Babel-like, too close
to the throne of God,

we are drawn to the light
of our touchable screens
like moths yet to be burned,
seeking connection or truth,
the litany of an age long since
numb to what it knows

of blood and tears and war,
forever proving the depths
to which a species given choice
will fall.  We rise

to forgiveness with humbled hearts,
kept honest by our love of words,
and the peace of a yoke
laid upon us by a God
willing to die.

Thanks for joining me on this journey of 30 days straight of poetry writing.  Congratulations to everyone who took up the challenge!  May we poets continue to grow in number and the love of a well-turned phrase never die.

One of my mother’s most cringing stories from her childhood involves the time when she got caught trying a smoke for the first time and was dragged to the front of the entire congregation that Sunday by her mother (who smoked, by the way) to confess her sin.
But she never took up the habit.
My Bible reading this week included James 5, where we are reminded that we are forgivable and are therefore instructed to “confess your sins to each other and pray for each other so that you may be healed. . . .”
I could be wrong, but I think it may be hard to find a church body where sins are regularly confessed amongst each other. I’m not saying the modern church doesn’t support each other. I am saying that even in a small modern church, not to mention the huge, popular churches that are the sizes of some small towns, it would be difficult to find an environment in which we could be so vulnerable. What would we do if we spent a chunk of each time together exposing the core of what makes us human? What would it do for us to hear our own sin confessed before fellow travelers, witnessing in their eyes the compassion and horror that we should feel about ourselves as we fall short of God?
What would happen, for instance, if one part of service involved everyone speaking aloud their sins of the past week, a cacophony of confession that only a God as powerful as the One we claim could understand? The idea brings to mind the gathering of the Israelites in the book of Nehemiah. The people have been scattered from their homeland under the Babylonians for generations. Finally, under the Persians, they are allowed to return to their homeland and begin to rebuild their temple and their defensive walls around the city of Jerusalem, not without tremendous obstacles. As the work is being completed, the entire community gathers to read the Law and confess their sins, standing for hours as Nehemiah leads them in this group effort at redemption.
When was the last time you were in a situation where you were made to utter something aloud that you hesitated to speak about? Why did you hesitate? When you finally said the words, how did you feel? Did the world end? Did whatever you feared actually happen, and was it as bad as you thought?
God wants us to confess our sins to Him. Through Christ, we are promised forgiveness when we truly repent, no matter what we have done. Have you truly repented of something that you haven’t said aloud to yourself, much less somebody else?
And just what is the end result of all this confession? James tells us that, too, at the end of verse six: “The prayer of a righteous person is powerful and effective.”
“No man is an island” as the poet says. We all function more effectively in community, even when it comes to doing one of the hardest things a human ever does, admitting when we are wrong.
Wherever two or three believers gather, He is there. Can you find just one more person of belief this week to share your confessions with, as James admonishes? Think about what kind of difference it could make for you and for the person with whom you share.

All about Christian living and fiction that makes a difference!

My Most Used Tags